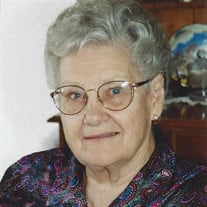 Carrie Elizabeth Eissler, 93, of Holden, Missouri, passed away April 2, 2015 at the home of Jim and Linda Gilcrest, Holden. Elizabeth, the daughter of Charles Perry Briscoe and Clara Cordelia Ridenhour, she was born February 12, 1922 in Holden, Missouri. She was united in marriage to Jacob Eissler on January 20, 1940. The couple lived on a farm south of Kingsville. Elizabeth was a charter member of the Holden Baptist Temple. She enjoyed cooking, gardening, canning, and needlepoint. Her greatest joy was her family especially caring for her children and grandchildren. Her children and grandchildren will always cherish the redwork embroidery pieces that she so lovingly created for them. Her legacy will live on through the collection of recipes in the cookbook created by her granddaughter. Survivors include the following three sons and three daughters: Mary Lou and Gary DeMasters, Charles and Sharon Eissler, Linda and Jim Gilcrest, and Ray and Una Eissler of Holden, Missouri; Joe and Teresa Eissler of Alma, Kansas; Gail and Joe Blanc of Houston, Texas; 14 grandchildren; 24 great grandchildren. Surviving siblings include Sam Briscoe of Excelsior Springs, Mo. and Jeanne Taylor of San Francisco, CA. She was preceded in death by her husband, Jacob Eissler, in 2006; one son Ronnie Eissler; one brother Lavoe Briscoe; three sisters Bernice Briscoe, Dorothy Johnson, and June Jones; two grandsons Dale Lee Gilcrest and Sean Donaldson. Visitation will be Monday, April 6th from 6:00 to 8:00 pm at Cast Funeral Home. Funeral Services will be April 7th at 2:00 pm at Holden Baptist Temple officiated by her pastor, Rod Albert. Interment will follow at Holden Cemetery. In lieu of flowers contributions can be made to Holden Baptist Temple.

Carrie Elizabeth Eissler, 93, of Holden, Missouri, passed away April 2, 2015 at the home of Jim and Linda Gilcrest, Holden. Elizabeth, the daughter of Charles Perry Briscoe and Clara Cordelia Ridenhour, she was born February 12, 1922 in... View Obituary & Service Information

The family of Carrie Elizabeth Eissler created this Life Tributes page to make it easy to share your memories.

Send flowers to the Eissler family.