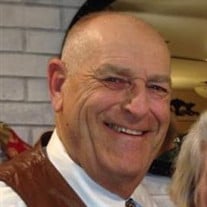 Charles Richard Good, 69, of Centerview, passed away peacefully in his sleep on Thursday, June 1, 2017. He is now at home with his Lord and Savior Jesus Christ. Charles was born October 19, 1947 in Kansas City, MO, the son of Everett and Betty Good. Charles was a 1965 graduate of Warrensburg High School. Following high school, he enlisted in the U.S. Navy, honorably serving his country for 4 years belonging to Aircraft Ferry Squadron Thirty-one (VRF-31). On July 28, 1972 he married Marsha A. Scherer in Warrensburg. They had been married for 44 years. Charles followed the Lord’s leading and graduated from The Master’s Seminary in California in 1988. He was a theologian and an ordained minister of the Gospel of Christ. He loved Jesus Christ. He loved to help people understand the Bible and faithfully shared his faith in Christ with many. He strove for excellence in all he endeavored to do whether it was playing and coaching baseball, Bible study, engine mechanic and machining work, and scuba diving. He was preceded in death by his parents and a stillborn son Edward Everett. He is survived by his wife, Marsha, of the home; sister Phyllis Steinbach (Centerview), brother Howard (Centerview), two sons; Major Everett Good, USMC (Oceanside, CA) and Major Daniel Good, USMCR (Burke, VA). Also surviving are 9 grandchildren, Trevor, Braden, Fiona, Miles, Sean, Levi, Violet, Louisa, Iris, and a tenth on the way. Family will receive friends Sunday evening, June 4th, from 6-8 pm At Ben Cast Funeral Home. Funeral services will be held at 2 PM Monday, June 5th with Pastor Rex Heckel officiating. Burial will follow at the Centerview Cemetary with full military honors. Pallbearers will be Howard Good, Everett Good, Daniel Good, Dennis Scherer, Gary Scherer, Johnny Parish. Memorial contributions are suggested to The Master’s Seminary in Sun Valley, CA. Full Military Honors will be provided by Holden VFW Post #5844 and Holden American Legion Post #90

Charles Richard Good, 69, of Centerview, passed away peacefully in his sleep on Thursday, June 1, 2017. He is now at home with his Lord and Savior Jesus Christ. Charles was born October 19, 1947 in Kansas City, MO, the son of Everett... View Obituary & Service Information

The family of Charles Richard Good created this Life Tributes page to make it easy to share your memories.

Send flowers to the Good family.