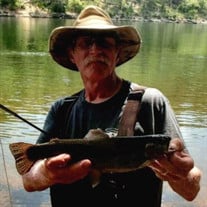 Curtis Lynn Warren, 66 of Holden, Missouri died on Monday, September 27, 2021, at KU Medical Center in Kansas City, Kansas. He was born Sunday, January 23, 1955 in Warrensburg, Missouri, and was the son of the late Richard Warren and the late Sarah (Bradshaw) Warren. He was the husband of Violet Warren. Curtis graduated high school from Holden High School - class of 1973. He achieved a Bachelor's degree from the University of Central Missouri in 1992. He lived all his life in Holden and married Violet in Holden on August 22, 1981. Curtis started his working career in the service industry. He was a former member of the Holden Fire Department and served as Fire Chief at one point. He was a former police officer for the City of Holden and an EMT Lead for Harrah's Casino. His love of the Earth led him to teaching biology in the Holden school district. He was an avid fisherman and loved wood carving. He enjoyed nature and collected fossils and arrowheads. He was passionate about collecting Pokemon and was a Pokemon Master. His family and friends will miss his outrageous sense of humor and love for life. Surviving are wife, Violet of the home; three sons, Curtis Alan Warren of Socorro, NM, Doc Williams of Holden, Aiden Buckley of Lee's Summit, MO; two daughters, Margaret Warren of Lee's Summit, Kelly Blankers of Holden; brother, Richard Warren of Deepwater, MO; in-laws, Melinda & Gene Strate; niece & nephew, Ariel Warren and Flint Warren. The family will receive friends from 1:00 PM to 2:00 PM on Tuesday, October 5, 2021, at Campbell-Cast Funeral Home, 407 S. Pine St., Holden, Missouri. A memorial service will follow at 2:00 PM with Clayton Foss officiating. The family suggest memorials to the American Cancer Society or the National Park Foundation. Honorary Casket Bearers: Aiden Buckley, Larry Kepler, Joe Mick, Jerry Paddeck, Curtis Alan Warren, Flint Warren, Richard Warren, Doc Williams.

Curtis Lynn Warren, 66 of Holden, Missouri died on Monday, September 27, 2021, at KU Medical Center in Kansas City, Kansas. He was born Sunday, January 23, 1955 in Warrensburg, Missouri, and was the son of the late Richard Warren and the late... View Obituary & Service Information

The family of Curtis Warren created this Life Tributes page to make it easy to share your memories.

Send flowers to the Warren family.