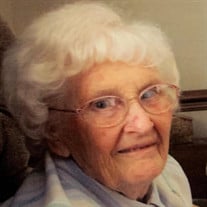 When asked how she was doing, Geraldine “Geri” Yvonne (Atkinson) Johnson, would show a degree of equanimity as she responded, “Well, I’m good I suppose, I’m ready to go whenever the Lord taps me on the shoulder.” At the age of 95, on Friday, July 30, 2021, at the Holden Manor Care Center in Holden, MO, the Lord tapped Geri gently on the shoulder and her mission here was complete. Geri was born on May 17, 1926, in rural Centerview, MO, the daughter of Samuel and Florence (Stone) Atkinson. On April 21, 1957, at the New Liberty Presbyterian Church in Denton, MO, Geri married, her husband of 58 years, David K. Johnson, who preceded her in death on March 12, 2016. She was a member of the Christian Church of Warrensburg, MO, then the Presbyterian Church of LaTour, MO. Geri called LaTour, Missouri home where she spent her days tending to the Centurion family farm alongside her husband David. Geri was a strong farm wife and many stories of the farm included Geri caring for the animals including the many cats in the barn, and one particularly brilliant blind cow who escaped across the county one night to which Geri always used to remind us that cows were not as dumb as we might mistakenly think. Geri loved storytelling, reminiscing how she survived Polio and even the time David accidentally backed over her with the Grain Truck, proving she was as tough as she was kind. She truly enjoyed the farm life, remembering fondly seeing all the cowboys and farmers on her trips with her dad to the sale barn in town, and later attending the opera at Pleasant Hill and square-dances in the surrounding towns for entertainment. Geri was a graduate of Blairstown High School and the Kansas City Secretarial School. She was formerly employed by the U.S. Department of Agriculture in their A.S.C. Office. As well as in the Johnson County Extension Office and with the Jerry Tally Ford Motor Company. Geri is preceded in death by her parents, Samuel Atkinson, and Florence Atkinson; her husband, David K. Johnson; one brother, Samuel Dean Atkinson; three nephews, William Porter, Keith Johnson, Mark Atkinson; two nieces, Karla Burton, Marie Kimberlin; one great nephew, Casey Ray Johnson. She is survived by three nephews, D.G. Johnson and wife, Ginger of Holden, MO, Charles “Hunky” Johnson and wife, Nita of Garden City, MO, Jim Atkinson, and wife Carol of Dogue, VA; two nieces, Karen Johnson of Garden City, MO, Margaret Porter of Carey, NC; many great nieces and nephews, family, and friends. For Geri, family seemed to be the one and only love that was greater than the farm. Although I didn’t know her as well as I would have liked, it doesn’t take a lifelong connection to understand that Geri valued her very large and extended family in a way that I have never witnessed before. From the detail she bestowed in her famous potluck dish or the laughter she enjoyed around the campfire down by Big Creek, family was at the center. I believe she could remember every birthday and every name of the most distant cousin twice removed. Although Geri would sometimes prefer to sit quietly reflecting, she would watch out the window for the school bus knowing the great-great nieces and nephews were on it, and family was never far from her thoughts. Visitation will be from 10:00 a.m. to 11:00 a.m. on Tuesday, August 3, 2021, at Campbell – Cast Funeral Home, (407 S. Pine, Holden, MO). Funeral Services will begin at 11:00 a.m. on Tuesday, August 3, 2021, at Campbell – Cast Funeral Home, (407 S. Pine, Holden, MO) with Pastor Linda Dudley officiating. Interment will take place at the Holden Cemetery, (1369 SW 400th Rd, Holden, MO). Pallbearers will be, Luke Johnson, Joshua Johnson, Jeremy Johnson, Justin Johnson, Jordan Johnson, and Ryan Burton. Honorary Pallbearers are Eric Atkinson and Jacob Atkinson. In lieu of flowers, memorial contributions may be made to the Holden Cemetery Association (102 E 2nd, Holden, MO) in care of Campbell – Cast Funeral Home. Online condolences may be left at www.castfuneralhome.com.

The family of Geraldine "Geri" Yvonne (Atkinson) Johnson created this Life Tributes page to make it easy to share your memories.

When asked how she was doing, Geraldine “Geri” Yvonne (Atkinson)...