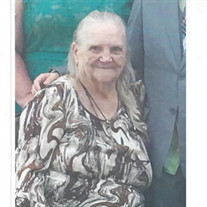 Golden Inez Gudde, 87, Holden, Missouri, passed away November 4, 2017 at Research Medical Center, Kansas City. She was born in Kansas City, MO, November 17, 1929, the youngest of five children born to Harley and Mabel (Judd) Brundage. She graduated from High School in Liberty, MO in 1947. Golden worked at National Bellas Hess in Kansas City before she married Ernest Lee Gudde in Liberty, MO on May 31, 1952. They lived in Gladstone, MO until 1961 then moved to rural Holden where they raised their five children. She was a farmers wife that retired from Rival Industries in Warrensburg. She ejoyed crocheting, yarn crafts, reading books, doing crossword puzzles, played croquet and pinochle with family. She was a member of the Holden VFW Ladies Auxillary and M.O.C. Golden was preceded in death by her parents, four brothers,Irvin, Leroy, Wayne, and Virgil Brundage, her husband Ernie Gudde, two sons, Rickey and Garry Gudde and step granddaughter, Jennifer Kaneer. She is survived by sons, Daryl and Dwayne Gudde, and daughter Teresa Harper. She is also loved and will be remembered by her grandchildren and great grandchildren and many others. The song, "Just Beyond the Moon" by Tex Ritter will always be a special memory for her and Ernie. Pallbearers are: H.R. Frey, Mike Murrow, David Murrow, Caleb Gudde, Jacob Gudde, and Steven Gudde. Honorary pallbearers are Molly McClaughery and Tim Brown. Services are under the direction of Ben Cast & Son-Wood Funeral Home Visitation will be held Wednesday November 8, 2017 10:00am at St. Patricks Catholic Church with Mass service to follow at 11:00am. Interment will be at St. Johns Blackwater Cemetery following the service

The family of Golden Inez Gudde created this Life Tributes page to make it easy to share your memories.

Send flowers to the Gudde family.