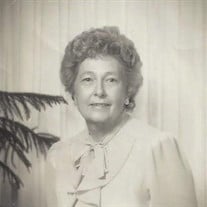 Obituary for Helen Hallar: Helen Collier Hallar died on October 23,2017, at Holden Manor Care. Helen was born on December 19, 1914, in Latour, Missouri and was the only daughter of William and Goldess Collier. Helen served as a high school mathematics teacher in Holden, Missouri from 1952 to 1984. Prior to her long tenure in Holden, she taught in Latour and Camdenton. Helen was a graduate of Central Missouri State Teachers College, now known as the University of Central Missouri. On August 7, 1942, she received her Bachelor of Science in Education with a major in Mathematics. In addition, Helen spent several summers attending graduate courses at the University of Missouri and the University of Arkansas. Helen married Wendell T. Hallar on June 2, 1942, at the First Presbyterian Church in Warrensburg, Missouri. They spent many hours traveling to the family farm to tend their livestock and take care of , their garden. Helen and Wendell spent time with friends as regulars on the duplicate bridge circuit. They were the parents of two children, a daughter Martha Ann and a son James William. Helen was preceded in death by her husband, Wendell, and one grandson, Mark Nelson. Helen is survived by her daughter Martha Hallar Nelson (Roger) and son James William Hallar (Susie), one grandson, Barry Nelson (Kristie), two granddaughters Gannet Hallar (Ian McCubbin), Brittan Hallar (Justin Trezza), and six great- grandchildren, Helen, Reagan, Ocean, Snow, Rio, and Cade. Helen was very proud of her children and grandchildren and followed their activities closely. Helen enjoyed gardening, especially taking care of her flowers and yard. She enjoyed looking out her back window at her flowers and the birds eating at the feeder. She very much liked reading books, usually the latest best seller. Even as her eyesight worsened, she kept reading by using a magnifying glass and enlarged print. Every day she would work the crossword puzzle printed in the Kansas City Star. Helen was especially proud of all the students she taught during her many years teaching mathematics. She really enjoyed it when her former students visited her after she was retired. At her 100th birthday party, she thanked the many friends who attended for her teaching experience and life in Holden. Helen was always planning for the future including birthday parties for her grandchildren, family celebrations, visits with family and friends, and trips to art galleries and cultural events. In her long life, she saw and experienced many things from traveling in an open air car with her parents, only heated by bricks to seeing a NASA launch at Cape Canaveral. She would want everyone who loved and cared about her to continue to look forward to their future. Memorial Contributions can be made to the Rose Hill Cemetery. Visitation will be Saturday December 2, 2017 at 12:00pm followed by a Memorial service at 1:00pm at Ben Cast & Son-Wood Funeral Home, 407 South Pine, Holden MO.

Obituary for Helen Hallar: Helen Collier Hallar died on October 23,2017, at Holden Manor Care. Helen was born on December 19, 1914, in Latour, Missouri and was the only daughter of William and Goldess Collier. Helen served as a high school... View Obituary & Service Information

The family of Helen Irene Hallar created this Life Tributes page to make it easy to share your memories.

Send flowers to the Hallar family.