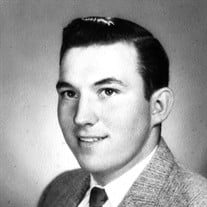 Jackie Keith Hobbs Jackie Keith Hobbs, age 76, passed away on Thanksgiving Day, November 22, 2018. He was born on September 26, 1942 in Kingsville, Missouri to Lawrence and Dixie Hobbs. Jackie married his sweetheart, Neva Carol Hobbs, on March 31, 1962. Both were graduates of Holden High School – Jackie the class of 1960 and Neva the class of 1961. They made their home in Holden where they have resided their entire married lives, and raised two children, Jerry Keith Hobbs and Brian Eugene Hobbs. A hardworking, fifth-generation farmer, Jackie raised cattle and row crops while also working a full-time job at Stahl’s Specialty. He retired from Stahl’s Specialty in 1994 after 34 years of service at the Kingsville and Warrensburg plants. He also found time to volunteer his time with the Holden Fire Department and Johnson County Western Fire District #2 from 1964 to 1990. Jackie also owned and operated Kingsville Feed in the late 1990’s. Jackie was a friendly fellow to meet, always kind and ready to do anything for anybody. He loved his family most of all, with a special place in his heart for five grandchildren and 10 great grandchildren. He is survived by his wife, Neva; sons, Jerry (Jodi) and Brian (Janine); grandchildren, Megan Hawks (Brandon), Michael Hobbs, Jamie Economides (David), Daniel Hunt (Brittany) and Allie Longenecker; great grandchildren, Elijah, Gabriel, Samuel, Josiah, Gideon and Lydia Economides, Peyton, Savannah and Grayson Hunt, and Jackson Hawks; brother, Franklin Hobbs (Deborah) and brother-in-law, Virgil Ballard (Susan). Visitation will be Tuesday, November 27 from 6-8pm, and funeral services will be Wednesday, November 28, at 10am at the Ben Cast & Son - Wood Funeral Home located at 407 South Pine, Holden, Missouri. Interment will follow the funeral services at the Holden Cemetery. In lieu of flowers, donations can be made to the Kingsville Seventh-day Adventist Church where Jackie was a lifetime member. Arrangements entrusted to Ben Cast & Son-Wood Funeral Home

The family of Jackie Keith Hobbs created this Life Tributes page to make it easy to share your memories.

Send flowers to the Hobbs family.