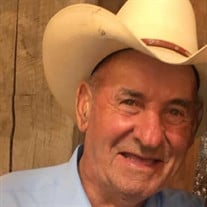 James “Tex” Christopher Stevenson, 80, passed away Friday, April 15, 2022 at his home in Kingsville Missouri, surrounded by his family. He was born on October 12, 1941, in Liberty, MO, to the late James and Leota (Bosley) Stevenson. Jim was raised near North Kansas City and attended Big Shoal School. He left school to move with his family to a potato farm near Liberty, MO, where he had his first job at the age of 15. In the early 70’s he began working for a ranch in Grain Valley and eventually moved to the Holden/Kingsville area to start his family. He held various jobs including, implement factory worker, milk truck driver and farm worker. He began driving a truck over the road and landed in North Carolina, where he remarried and stayed for nearly 20 years until recently moving back to the Holden/Kingsville area to be with his children and grandchildren. Jim was a hard worker his entire life, never sitting still for too long and was considered a “Jack of All Trades”. He loved horses and horseback riding and shared that love with his family. He was an excellent dancer that would spin anyone around a dancefloor anywhere. Jim was always dressed and ready to go in his jeans, pearl snap shirts and a cowboy hat. Fishing and being outdoors was always a priority. More recently you could find him driving around checking on the buffalo and smoking his Black and Mild cigars. Probably one of his most favorite things to do was go to the casino and when he couldn’t make it there, he “secretly” bought scratch off tickets to hold him over. Jim was ornery and loved life and always knew how to have a good time and get people to smile. If he wasn’t out driving around causing mischief, he was watching Walker Texas Ranger, John Wayne, or other westerns, and knew what was going to happen because he had seen them all many times. He loved and adored spending time with his grandkids and especially his great grandkids. He will be greatly missed by all those who knew and loved him. Surviving his passing include 2 daughters, Julie Marie Ring of Kingsville, MO, Sandra Louise Stevenson of Independence, MO; son, James Allen (Lori) Stevenson of Odessa, MO; brother John Thomas Stevenson of Orrick, MO; sister Linda Stevenson of Excelsior Springs, MO; wife Joann Stevenson of North Carolina; 10 Grandchildren; 13 Great Grandchildren. James was preceded in death by his parents; 2 brothers, Kenny Stevenson and Phillip Stevenson; 2 sisters Margaret Curtis and Juanita Holtclaw. A Memorial Service will be held Friday, April 22, 2022, at 6 p.m. at Campbell-Cast Funeral Home in Holden, Missouri. Chaplain John Phillips will be officiating. His Grandchildren being his Honorary Casket Bearers. Online condolences can be made to the family at www.castfuneralhome.com

The family of James Christopher Stevenson created this Life Tributes page to make it easy to share your memories.

Send flowers to the Stevenson family.