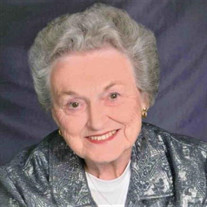 Joanne C. Rodgers, age 91, of Holden, Missouri, passed away peacefully at St. Luke's East Hospital in Lee’s Summit, Missouri surrounded by her beloved family on March 24, 2019. Joanne was born in Kansas City, Missouri on January 11, 1928 to William H. and Edna (Smith) Coleman. She lived in the Holden area most of her life. She graduated from Holden High School with the class of 1946. Following high school, she attended the Chillicothe Business College, from which she graduated in 1947. She was united in marriage to Thomas Rodgers on June 20, 1948 in Holden Missouri. Joanne was a member of the First Christian Church in Holden where she volunteered as a secretary and treasurer for many years. She was active in PEO as well as Christian Women’s Fellowship at her church. For many years she was employed by Farmers and Commercial Bank, where she worked as an assistant cashier. She was a devoted wife, mother and grandmother who loved to attend horse shows and other activities in which her grandchildren participated. Joanne is survived by three sons, Lynn Rodgers and wife Cinda of Springfield, Missouri, Lee Rodgers of Grandview, Missouri, Lyle Rodgers and wife Pamela of Holden, Missouri, five grandchildren, four great-grandchildren, and many nieces, nephews and cousins. Joanne was preceded in death by her father William and stepmother, Thelma Coleman, her birth mother Edna Coleman, her husband Thomas Rodgers and her brother Robert Lee Coleman. Visitation will be held from 1:00 p.m. to 2:00 p.m., Thursday, March 28, 2019 at the First Christian Church in Holden followed by funeral services at 2:00 p.m. at the church. Memorial Contributions may be made to the First Christian Church in Holden. Interment will follow the services at the Holden Cemetery.

The family of Joanne C. Rodgers created this Life Tributes page to make it easy to share your memories.

Send flowers to the Rodgers family.