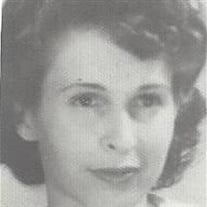 Lila J. Bauer of Holden, MO, passed away in her home Friday, December 18, 2015 at the age of 96, surrounded by her family. Lila was the daughter of Coral Willis and Minnie Sue (Mason) Willis, and was the youngest of 8 siblings including sisters Vida, Sadie, and Erma, and brothers Coral Jr., Glen, Orville, and her half-brother Jack. Her parents died early in her life and she was raised and cared for by several relatives through her years. She spoke fondly of her adventurous childhood, and often spoke of the blessing of getting to have “six mothers” including her ﬁrst stepmother Laura, the earliest she remembers. She was primarily raised by her sisters and lived in several states before settling in Independence, MO. Lila was a faithful member of the RLDS Church, baptized at the age of 9, and enjoyed sharing her story of being baptized in the RLDS Auditorium in Independence before the building was even completed. She met Richard Winegar at church in Independence in her early teens. Lila’s eyes would light up and she loved to tell stories of their falling in love and their early years together; they married in July 1939 and subsequently moved to California, where they raised their four children, Beverly, Phillip, Barbara, and Carl. Richard Winegar passed away in 1964 and Lila remained in California until she married her second husband, Oscar Bauer, in 1968. The two returned to Missouri and built a home on the Lake of the Ozarks outside of Lincoln, MO, where they lived until Oscar’s death in 2000. Lila moved to Holden to live with her daughter, Barbara, and her family a few years later. She was a member of the Chilhowee Restoration Branch church after moving to Holden, and in her later years enjoyed shopping, visiting with friends and family, and spending time outdoors, taking walks and sitting in the garden. She loved to sing hymns and was particularly fond of “The Old, Old Path” and often sang it with her children, grandchildren, and great grandchildren. Lila was an avid sewer and also enjoyed quilting, making many beautiful quilts over the years for friends and family, and she collected dolls as well. She had an unshakeable faith in God and lived her faith without reservation. She was generous and kind, forgave easily and never held a grudge, always looked for the bright side of life. She lived her life to the fullest while also looking forward to the day she could return to her Father in heaven to hear the promised words “Well done, good and faithful servant.” She is survived by her daughter, Barbara (Winegar) Shellenberger of Holden, and her oldest son, Phillip Winegar of Ionia, MO, as well as 8 grandchildren, 13 great grandchildren, and 10 great-great grandchildren. A memorial service will be held at Chilhowee Restoration Branch on Saturday, January 9, 2016 at 1 pm followed by a brief interment service at Wesley Chapel Cemetery in Holden. Memorial contributions can be made in memory of Lila Bouer, to the Chilhowee Restoration Branch Church.

Lila J. Bauer of Holden, MO, passed away in her home Friday, December 18, 2015 at the age of 96, surrounded by her family. Lila was the daughter of Coral Willis and Minnie Sue (Mason) Willis, and was the youngest of 8 siblings including sisters... View Obituary & Service Information

The family of Lila June Bauer created this Life Tributes page to make it easy to share your memories.

Lila J. Bauer of Holden, MO, passed away in her home Friday,...

Send flowers to the Bauer family.