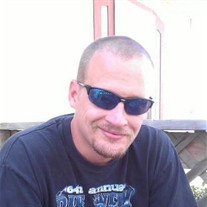 Louis Patrick Orr, 39, Holden, MO, passed away Monday September 11, 2017 from a car accident that took his life much to soon. Louis Patrick Orr was born January 1, 1978 in Independence, Missouri to Louis William Orr, and Patricia Irvine (Previously Orr). Louis grew up in Holden and graduated from Holden High School in 1997. After high school, Louis joined the United States Navy. Shortly after joining, Louis and Melissa McConville (then girlfriend) had a daughter, Anna M. McConville. They separated but remained friends for Anna's sake. Shortly after, he met Christina Buccigrossi and they married and had a son Jason M. Orr. August 12, 2003 Louis, while visiting his parents on leave, there he saw a picture of a woman whom he thought was beautiful and just had to know who she was. His father called her and Louis spoke with her for the first time.After speaking with her for two weeks he decided to leave his parents to see her. Louis drove from Missouri to South Carolina to meet with the love of his life, Laura. From the first sight of each other, Louis and Laura fell in love and were married October 13, 2004. Together, they had three children, Emily Orr, Mikayla Orr, and Calvin Orr. Throughout the 14 years together, Louis and Laura had a great life. Louis had a lot of friends who loved him dearly. With a true and pure heart of gold there wasn't a person Louie wouldn't help. He was always willing to give a helping hand and was quick to make you laugh, to give you a shoulder to cry on or just someone to talk too and loved his family. Louis loved to hunt, save animals, work on cars and trucks ride motorcycles, collect guns and knives, and loved his job. Louis led a good life and was loved by so many and will be greatly missed. Louis is survived by his wife Laura of the home, his parents, Louis William Orr and Patricia Lynn Irvine, two sons Jason Orr and Calvin Orr, three daughters Anna McConville, Emily Orr, and Mikayla Orr, and one brother Timothy Orr. Please join his family and friends to celebrate Louis's life Saturday September 16, 2017 at Ben Cast & Son-Wood Funeral Home 12:00pm Visitation and 1:00pm Service which is open to everyone. Graveside services are reserved for family and close friends. Memorial contributions can be made to Laura Orr to be used for family expenses.. Interment at the Holden Cemetery

The family of Louis Patrick Orr created this Life Tributes page to make it easy to share your memories.

Send flowers to the Orr family.