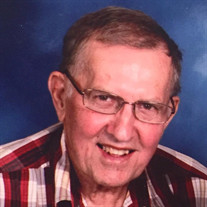 Reed Hough, 79, Holden, Missouri, went home to be with his Lord and Savior on March 2, 2018. He was born the youngest of five, on November 1, 1938, to Aaron and Marian (Reed) Hough of Blairstown, Missouri. Reed lived in Blairstown until moving to Holden in 1948. He graduated from Holden High School in 1957. In his youth, Reed spent many mornings helping his mother carry water, firewood, or coal to prepare for school days at Pleasant View, Stout, and Scaly Bark country schools where his mother was a teacher. Reed was always fond of animals growing up on the farm. His love for horses began there and continued throughout his life. After high school graduation, Reed attended auto body shop classes at Central Missouri State University for one year prior to attending auto body school in Kansas City, Missouri. He delivered popcorn to movie theaters throughout Kansas City as a side job while attending auto body school. After graduating from auto body school he returned to Holden and started construction on Reed’s Body Shop. He worked at the Holden Post Office until construction was complete. Reed also assisted his father, Aaron, in moving houses throughout the surrounding counties and the Truman Lake area. Reed’s Body Shop opened in 1959 and was in operation until 2017. He purchased his first tow truck in 1977. During those 58 years, Reed repaired, towed, unlocked, pulled out of ditches, and jump-started countless vehicles throughout the county, always utilizing his motto, “It’s the ‘know-how’ that counts!” He seemed to be “most popular” on Friday and Saturday nights after he had gone to bed. “Give me time to get dressed and I’ll be on my way,” was heard by many callers needing his assistance with their vehicle. Reed was a community man as well. Reed was a member of the First Christian Church of Holden where he was baptized on December 13, 1953. He was also a member of the Holden Police Merit Board, Holden Chamber of Commerce, Holden Saddle Club, Johnson County Planning and Zoning Committee, and many auto body associations. He also helped with community events such as the moving of the band stand that once sat where the Hallar Building is now, to the Holden Cemetery. Reed had many jobs, but family always came first. He was a family man and his life and love revolved around them. The bond he shared started with his parents and siblings then grew stronger as he started his own family. His boys were his world and it was obvious by his actions. He shared his love of the Lord, life, strong work ethic, and many life skills with each of them. Reed was constant with his display of support and encouragement, always reinforcing their bond. He enjoyed traveling, and in his opinion, the best way to travel was on horseback. He and his wife Candy spent many trips traveling in various states with friends on horseback. He also enjoyed trail rides, campfires, canoe trips, and observing and enjoying God’s creation. For many years, Reed and Candy also enjoyed assisting with the annual Buffalo Round-Up at Custer State Park in South Dakota. His love for hunting began as a child and was another important part of his life. Many special friends and life-long memories were made in the mountains of Colorado and hills of South Dakota. Sharing that love with his children, friends, and grandchildren was a highlight in his life. Reed leaves behind his wife, Candy, of the home, three sons, Destry (Cricket), Mike, and Rob all of Holden, along with four grandchildren, Sam Hough (Brandy), Celeste Hough, Alynna Hough, and Ryan Hough, all of Holden. He was preceded in death by his parents, Aaron and Marian Hough, his siblings, Larry (infant), Doyne Hough, Virginia Hough-Ross, and Marjorie Hough-Call. Visitation will be 6:00 to 8:00 p.m. on Wednesday, March 7, 2018 at the Holden First Christian Church. Services will be held at 11:00 a.m. on Thursday, March 8, 2018 at the Holden First Christian Church followed by burial at the Holden Cemetery. In lieu of flowers, memorial contributions can be made to the Holden First Christian Church or St. Jude’s Children’s Hospital. Arrangements entrusted to Ben Cast & Son-Wood Funeral Home

Reed Hough, 79, Holden, Missouri, went home to be with his Lord and Savior on March 2, 2018. He was born the youngest of five, on November 1, 1938, to Aaron and Marian (Reed) Hough of Blairstown, Missouri. Reed lived in Blairstown until moving... View Obituary & Service Information

The family of Marion Reed Hough created this Life Tributes page to make it easy to share your memories.

Send flowers to the Hough family.