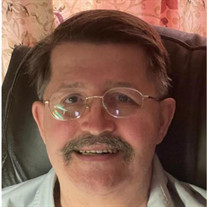 Mark A. Suthers, age 66 passed away October 3rd, 2021 at his home with his wife and his son at his side. He was known as "Marko" to his brother. He was born August 21, 1955 to Marvin and the late Marie Suthers (Davis) in St. Joseph Missouri. Mark spent most of his life in Kansas City where his class of 1974 was the first to graduate from Hickman Mills High School. After high school he joined the Navy during the Vietnam Era. After serving his country he became an apprentice with the Boilermakers Local Union 83 and then became a journeyman welder for Local 83. He was a member of the American Legion where he was the Commander for Hickman Mills Memorial Post 598 for 7 years. When the post closed he transferred to Robert L. Clore Post 189 in Lee's Summit. Mark was a proud member of the Patriot Guard Riders. He enjoyed fishing, hunting, camping, and helping his fellow veterans. He was a woodcarver and made beautiful writing pens. He loved spending time with his family and friends along with his special fur baby, Angel. He is survived by his wife of 15 years, Lori Suthers; his father, Marvin Suthers; one brother, Steve (Vicki) Suthers; one sister, Melody (Kevin) Schmucker; one daughter, Jenni (Matt) Logeman; one step-son, Tony (Kayla) Ippolito; two brother-in-laws, David (Linda) Kirchoff, Richard Kirchhoff; seven grandchildren, Devin Fitzpatrick, Nick Logeman, Ollie Logeman, Hunter Ippolito, Wyatt Sandy, Brooklyn Logeman, Connor Ippolito; four nephews, Brian (Jamie) Suthers, Jason (Lena) Vaughan, Jack Dorst, Eli Kirchhoff; two nieces, Michelle (Mario) Iglesias, Sheena (Robert) Sapp; five great-nephews, Bradley Suthers, Connor Suthers, Mario Igelias, Dominic Vaughan, Liam Sapp; and one great-niece, Kelsey Igelias. He was preceded in death by his mother, Marie Suthers; his in-laws, David and Aline Kirchhoff; one daughter, Jill Suthers-Fitzpatrick; one step-son, Vince Ippolito. The family will receive friends from 1PM-2PM at the American Legion Post 189 located at 820 SE Vista Dr. Lee's Summit, MO 64063, on Saturday, October 9, 2021. A memorial service with full military honors will follow at 2pm with Pastor Mike Taylor officiating. In lieu of flowers, memorials may be made out to the family. Funeral arrangements have been entrusted to Campbell-Cast Funeral Home and online condolences may be made to the family at www.castfuneralhome.com

Mark A. Suthers, age 66 passed away October 3rd, 2021 at his home with his wife and his son at his side. He was known as "Marko" to his brother. He was born August 21, 1955 to Marvin and the late Marie Suthers (Davis) in St. Joseph Missouri.... View Obituary & Service Information

The family of Mark "Marko" A. Suthers created this Life Tributes page to make it easy to share your memories.

Send flowers to the Suthers family.