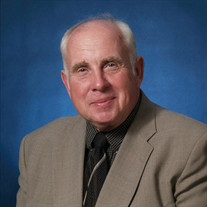 Michael “Mike” Leroy Hodges, age 72 of Kingsville, Missouri died Thursday, February 28, 2019 at Lee’s Summit Medical Center. He was born November 16, 1946 to Johnnie Richard and Ethel Cloeva (Gregg) Hodges in Butler, Missouri. Mike grew up in Adrian, Missouri where he attended a one-room school house, Buckhorn Elementary, before attending school in Adrian. While in high school, he played tenor saxophone and was on the Adrian Blackhawks football team. Mike graduated from Adrian High School in 1964. He later attended Central Missouri State College and received a Bachelor of Science degree in both Law Enforcement and Sociology. After a ten-year career in law enforcement, Mike operated his own business for forty years, retiring in 2018. He had a calling to share his story as a victim of DUI and to share the Gospel with people who were in jail. Mike is survived by his wife of 48 years, Helen; one daughter, Stacey Hodges of Prairie Village, Kansas; two sons, Ryan Hodges and wife Nicole of Lee’s Summit, Missouri and Tim Hodges and wife Dawn of Bolivar, Missouri; seven grandchildren; and his sister, Barbara Fresquez of Evergreen, Colorado. He was preceded in death by his parents. Funeral services for Mike Hodges will be 10 a.m. Tuesday, March 5, 2019 at Lone Jack Baptist Church in Lone Jack, Missouri. Visitation will be prior to services from 9-10 a.m. Tuesday at the church. Burial in Garden City Cemetery in Garden City, Missouri. Contributions to Ascend Hospice and Lone Jack Baptist Church.

The family of Michael Leroy Hodges created this Life Tributes page to make it easy to share your memories.

Send flowers to the Hodges family.