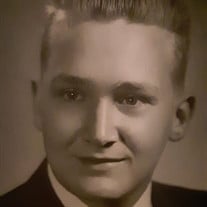 Oliver “Olie” Austin Crigger, 77, of Holden, Missouri passed away Friday, September 10, 2021. Oliver was born on May 11, 1944, in Independence, Kansas the son of Austin and Minerva Crigger.  He graduated from Independence High School in Independence, Kansas the class of 1962. Oliver married Jeanne (Fleckenstein) Crigger, his wife of 36 years, on Saturday, July 13, 1985, in Lee’s Summit, Missouri.   He was employed with AT&T Technology in Gold Plating Productions for 30 years. Oliver was a member of the First Baptist Church in Raytown, MO.    Oliver enjoyed being a part of the Boy Scouts of America with his son.  He was a former Troop Leader for Troop Number 220 in Lee’s Summit, MO.  Oliver loved playing poker, bowling, and going hunting and fishing. Oliver is preceded in death by his father, Austin Crigger and his mother, Minerva Crigger . Oliver is survived by his wife, Jeanne Crigger of Holden, MO; two sons, Roy Crigger of Tyler, TX and Tony Crigger of Lee’s Summit, MO; one brother, Reubon Calvin Crigger; one sister, Donna Gibson; his first wife, Marvelle Crigger; 3 grandchildren, Matthew, Luke and Mia and 1 great grandchild, Koda. There are no services scheduled at this time. Memorial contributions may be made to the American Kidney Foundation or the American Diabetes Association in memory of Oliver Crigger. Online condolences may be left at www.castfuneralhome.com. Arrangements entrusted to Campbell – Cast Funeral Home, Holden, MO.

Oliver &#8220;Olie&#8221; Austin Crigger, 77, of Holden, Missouri passed away Friday, September 10, 2021. Oliver was born on May 11, 1944, in Independence, Kansas the son of Austin and Minerva Crigger.  He graduated from Independence High School... View Obituary & Service Information

The family of Oliver ''Olie'' Austin Crigger created this Life Tributes page to make it easy to share your memories.

Send flowers to the Crigger family.