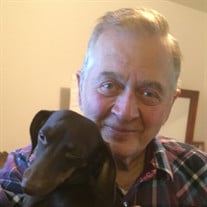 Wayne Gene Kubik, 75, Holden, Missouri passed away November 21, 2016 at St. Luke's Hospital in Kansas City, Missouri. Wayne was born in Wahoo, Nebraska June 15, 1941 to Edward Joseph Kubik and Blanche (Brezina) Kubik. He worked for the Union Pacific Railroad as a Design Engineer, and after retirement he spent his time farming. Wayne served in the Nebraska Army National Guard and after moving to Holden in 2008, he joined the American Legion Post 90 in Holden, Missouri. Wayne attended the St. Patrick Catholic Church and was an active member of the Knights of Columbus. He was an avid hunter and fisherman and his dogs had a special place in his heart. Wayne loved spending time with his grandchildren and had a generous spirit in all kinds of ways. He brought a smile to the faces of his grandchildren every time they saw him. The grand kids remember him best for him tickling them until they were blue in the face, One of the things he would always say to the kids is,"Grab a toe and away we go". He was definitely loved and will be missed by all. Surviving his passing are Three daughters, Kelli Ann MacLean and husband Mike of Centennial, Colorado, Julie Lynne Bose-Snyder and husband Bob Aurora, Colorado, Amy Beth Edwards and husband Chris of Lone Jack, Missouri and Twelve Grandchildren. He was preceded in death by his parents. Memorial contributions are suggested to the American Heart Association Services will be held on Saturday November 26, 2016 at 10:00am at St. Patrick Catholic Church, Holden, Missouri. Honorary Pallbearers: Donald Snyder, Randy Bose, Alex Snyder, Melissa Snyder, Jesse Bose, Jenni Weston, Jared Edwards, Blake Edwards, Abby Bixby, Brody Bixby, Katie MacLean, Hannah Snyder

The family of Wayne Gene Kubik created this Life Tributes page to make it easy to share your memories.

Send flowers to the Kubik family.